Delegates from around the UK met in Milton Keynes last week for the annual conference of UNISON’s university workers.

Fifteen motions were debated, and there was a speech from Christine McAnea, Assistant General Secretary and an interesting presentation from Jim Dickinson, Associate Editor at WonkHE. 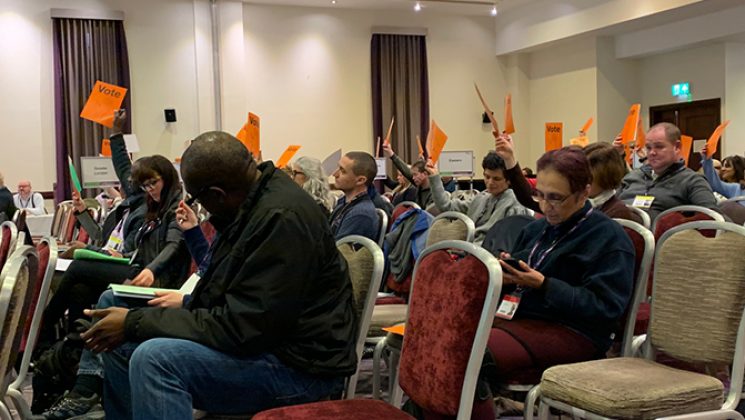 The conference was dominated by the general election result, what this might mean in relation to governmental higher education policy and the implementation of some or all of the Augar Review recommendations, but perhaps more importantly, the response of higher education workers in resisting attacks on our jobs, pay and pensions.

Motions discussed all this, as well as issues concerning disabilities, climate change, the need to develop black activists across the union and trans rights. Whilst much of this was not controversial, the debates over our tactics to deliver the threat of strike action over pay and other injustices provided more of a clash of ideas.

A motion from Yorkshire and Humberside Region aimed to abolish the requirement for UNISON to conduct consultative ballots ahead of the formal, legally required postal ballot. This has been the normal practice for many years now, whereas UCU for example will move straight to a proper ballot, avoiding delay and potential confusion which comes from having to ask members to vote twice in different ways over the same issue. UNISON’s structure require bodies proposing a formal ballot to be able to demonstrate that the ballot is worth it, both in terms of cost and likely result, and the argument has been that a consultative ballot is a good way of gauging the mood of members ahead of the real thing. The problem is that this takes time and in a scenario where the employers are already deliberately dragging talks out to hit the summer months, time is something we never have enough of.

The motion was actually written to commit the Service Group Executive (SGE, the leading higher education body) to “consider alternative methods to gather the mood” and as such, this motion was passed by conference with the SGE supporting the motion “with qualifications.” What this actually means in practical terms remains to be seen, as we enter negotiations for the 2020-21 pay round with all unions still in dispute over 2019-20’s imposed offer and UCU actively planning the next round of strike action in late February.

The largest controversy was saved for our branch motion on ballot tactics, which tries to commit the SGE to calling disaggregate ballot for 2020-21 rather than the aggregate ballot we’ve been used to. We’ve been actively calling for this for some time now, based on the premise that an aggregate ballot will not, short of some miraculous increase in levels of member engagement on a national scale, result in us hitting the required 50% turnout. (The 2019-20 campaign aimed to improve on the 31% turnout of the previous year, only to result in 29%. Hardly a figure to inspire another attempt at this!)

Delegates in favour of our motion pointed out that trying the same thing every year and expecting different results is the classic definition of idiocy. Whilst we want all branches and all members to vote in favour of action if it results in (and is necessary for) a successful pay campaign, if branches do not hit the 50% then this does not mean that branches which do are prevented from striking, or at least threatening to. What we want is a tactic that allows flexibility and uses the strength of well organised branches to deliver a result, rather than allowing the less well organised branches to hold us all back. UCU have already learnt this lesson and have adapted their tactics accordingly, having taken strike action at some branches whilst simultaneously re-balloting the others.

There was some organised opposition to this, and some delegates argued that a disaggregate ballot could mean the ending of national pay bargaining. They also pointed out that some branches would be displaying their weakness if their Vice Chancellors knew that they achieved a very poor result.

For 2019-20, the best performing branches, like ours with a 51.4% turnout (!), offset those that performed badly. Since the weighted average overall was 29%, some branches inevitably were hitting the low twenties, as some braches were achieving over 40%. The point is though that under different circumstances, where members are aware of the fact that they are likely to be asked to take action if the result at their university is positive (i.e. a local vote for strike action on a 50%+ turnout), then the results at many university branches would be significantly higher, at least in terms of turnout, because the members would be more involved in the local, democratic decision. It could, and probably would increase the national turnout, since the results would be more immediately felt.

A total of 19 speakers contributed to the debate, including both Martin and Sian (our delegates from Brighton) and the “platform speaker” who put the SGE’s position, which was to oppose the motion.

After a long but engaging debate, the vote was taken and this was so close that it led to a card vote (the first at a higher education conference for 17 years apparently.) A card vote moves the decision making from a simple show of hands of delegates, to the members represented by the delegates and gives each branch attending the conference the number of votes as that branch has members. In theory, it’s more democratic, assuming that members are willing to trust their branch delegates to make a decision on their behalf and that a delegate from Birmingham say, has more votes than their equivalent delegate from Winchester, on account of representing a larger group of higher education workers.

The card vote passed the motion by around eight thousand votes to six thousand. What was significant from last time our branch tried this, is that representatives of the larger branches in particular have accepted that the tactics tried before have not worked and it’s time to try something different. Obviously the larger branches from the larger universities, Manchester, Leeds etc. carry a lot of weight in a card vote.

Whilst this is a great victory for our branch, and something for Sian, Martin and us all to be proud of, this is only part of the story. It will still be necessary to make sure that our tactics and actions, on a national scale are geared towards delivering a significant result on pay for 2020-21, as well as resisting some of the likely attacks we’ll be facing, both on a national level and locally.

Overall, the conference was lively (in part, thanks to Brighton’s motion) and created many thought provoking discussions. With two motions and one amendment, the latter raising the issue of a high-cost weighting to pay discussions, similar to the London-weighting, our branch led the way in terms of branch motions. Our two delegates spoke on several occasions and received widespread praise from other higher education activists.

There’ll be another conference next year, as well as our big National Delegate Conference (for the whole union, not just higher education), 16th-19th June in Brighton. Our branch can send as many visitors as we like, so please get in touch if you’d like to go, for all four days or just a few hours, or if you just want to find out more about it.